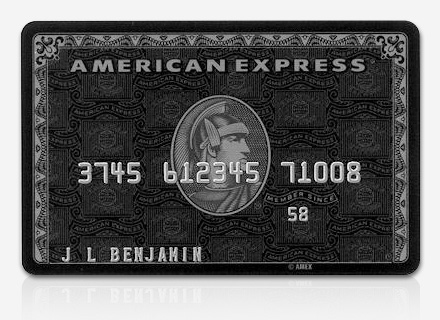 What is the American Express black card? Some of you have not heard of it, let alone seen or held one. It doesn’t show up on the AMEX website for you to even apply for. There are no marketing materials on it because it is invitation only. That’s right, a charge card that is so exclusive that you can not even ask for it – they have to ask you.

For those of you that do know about the AMEX black card (officially named the Centurion card), when you think of it, you think of the rich and famous. Stories of wealthy people buying exotic cars, vacation homes or yachts simply with a charge card, and honestly, it isn’t too far from the truth. It even started out as a myth from rumors that Amex was distributing this “black card” to its highest net worth clients. AMEX then decided to capitalized on the idea, and the card was introduced in 1999. The titanium card was built to draw attention. It will set off metal detectors, and is surprisingly heavy due to its metal composition.

I have held one before (not mine), and it is remarkably different.

The requirements for getting an invitation aren’t officially listed anywhere, but those who have received one generally meet the following criteria. Wikipedia also states this reference: “the average Centurion cardholder has $16.3 million in assets and an annual household income of $1.3 million.”

Meet these requirements? Great, now sit tight and check your mail everyday for an invitation. Once that comes, you’ll have to decide whether the cost of having the card is worth the benefits.

Yep, digest those figures for a minute. And now, the benefits.

Benefits
1. Tickets to major concerts, sporting events are blocked off especially for card holders.
2. High spending limits – it’ not unlimited, but it’s going to be dependent on your net worth. If you saw some of the figures earlier, these are large numbers.
3. Private Jet – you have an option to be a partial owner of a private jet
4. Travel – Higher tier elite status with several partner airline and hotel programs. Automatic upgrades, and even free night stays at some of the nicest hotel brands like the Peninsula and Shangri-La.
5. Gift cards – randomly receiving $500 gift cards for high end retailers have also been reported.
6. Personal Concierge – they will do everything legal and within their power to make you happy and fulfill your requests. There’s even a reddit post by someone who used to work for AMEX concierge services here. It’s a fascinating read and I’ll list my two favorite questions & answers below.

AMEX Concierge stories from Reddit:
Question #1: “Was there anything you had to do that you really wanted to decline, but couldn’t?”
Answer #1: “I worked there when the Wii first came out. You couldn’t find them anywhere. You probably would have more luck punching out a 13 year old kid leaving a Toys R Us with one, than getting one through us. I had a lady call in demanding one. She didn’t care how we did it, but her grandson WOULD have one for Xmas. Which was…a month away. It took me 2 weeks. But I found one. All I did for two weeks, was call every Toys R Us, Game Stop, Walmart, Target, you name it, asking for one. I finally found one in some town in Ohio and the store promised to hold it. I got a messenger to pick it up and ship it. I was angry the whole time because it was such a ridiculous request, and she didn’t even say thank you. Not even an acknowledgement when that package arrived at her house.”

Question #2: “Whats the most hilarious/asinine request you’ve gotten? The one you really had to dig deep to not laugh about while taking the request.”
Answer #2 (By the way, I almost fell off the chair when I read this so I had to share it): “A client was on a business trip in another state. He said he ate something that really upset his stomach and right in the middle of the conference, where he was on some sort of panel, he shit his pants. He tried to pretend it didn’t happen and ignore it, but I guess the other people on the panel started to smell it. When he finally excused himself, some slipped down his leg and he left a little pooh trail to the bathroom. He called me from the bathroom, mortified, but trying to laugh at the situation. I called the hotel concierge, who ran across the street, bought him a pair of underwear, socks and pants, and brought it to the man in the bathroom. Just the detail he put into the story, had me laughing so hard. He was laughing with me and was happy that I wasn’t judging. Because he was so nice and I felt so bad, without the gentleman knowing, I got the hotel concierge to fill his bath, and put some Peptol Bismal in his room for when he got back.”

So as you can see, some of the concierges will really go out of their way to help you! Do you think these benefits outweigh the costs though? My personal opinion is that the perks are great, but this is more of a status symbol. Everyone wants to stand out, be different, and be exclusive nowadays. Having this card is certainly one way of doing that.

How bad do you want to be a Centurion card holder now?